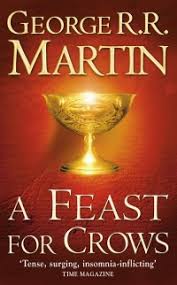 How many months have I taken to finish this book? I can’t even remember. Blame my hectic work hours or my laziness, it was difficult to take out time to read. In fact, I didn’t even touch my kindle for a WHOLE WEEK because I was so exhausted at the end of the day. This book also must share some part of the blame since it started on such a boring note. The chapters? Longer than ever.

The third book was fantastic! I could not put it down, nor could I get myself enough sleep because I was so engrossed in reading it. The expectation bar was raised to it’s highest. And then, I started reading this book with all the enthusiasm in the world because it promised so many chapters on Cersei, who I find to be the most intriguing character of the whole series. I wanted to get a glimpse into her evil mind and see the world through her eyes. After finishing my third book, my opinion about Jaime Lannister changed completely. He wasn’t evil like his twin, who is quite a selfish person.

No Dany. No Jon. No Tyrion. No Bran. Martin’s fourth book was so big that it had to be cut into two so that the readers were able to cope. He managed to write down complete stories about Cersei, Jaime, Brienne and Samwell with a glimpse into the life of Arya (who is now training to be one of the Faceless Men), but skipped the other characters who will be seen in his fifth book, which I’ve heard is quite extra-ordinary.

Not that the writing is bad in this one, in fact, some of the chapters are engaging, especially in the second half. As for the others, oh boy, it just kept on dragging and dragging to a point where you don’t care anymore. Some part of me wanted to skip this entire book and jump to The Dance of dragons. But I am glad I didn’t. Boring as it might be, this book is quite an important one.

Brienne is on a mission to find Sansa Stark. Jaime hands her the Oathkeeper and sends her on a journey to find Sansa and take her somewhere safe where Cersei can’t reach her. Samwell is on his way to Oldtown with Gilly, her baby and Maester Aemon, where he wishes to become a maester himself. Arya is in Braavos in the House of Black and White. She is learning new things everyday. But the best of them all is Cersei. She thinks she can outsmart anyone in the Seven kingdoms and beyond. She is the fairest of them all. Little does she know, she gets tangled in the web of her own schemes. How I have enjoyed every word of that chapter! *evil grin*

I can’t make up my mind how many stars this book deserves. Some chapters I have enjoyed to the core and some I wanted to skip. Still, a decision has to be made and I would highly recommend reading this book only so you understand what’s really happening in the fifth one.

Favorite Quotes from the book:

“History is a wheel, for the nature of man is fundamentally unchanging. What has happened before will perforce happen again.”

“We all dream of things we cannot have.”

“Every man should lose a battle in his youth, so he does not lose a war when he is old.”

(Disclaimer: All opinions expressed are strictly my own and in no way influenced.)

This blog is for people who love to eat, drink and be merry! Well, that's the first priority anyway. If you share the same passion for food, books and travel, then you might enjoy reading what I have to post!

Quote of the day!

There is no shame in fear, what matters is how we face it! – A Clash of Kings (Game Of Thrones II)