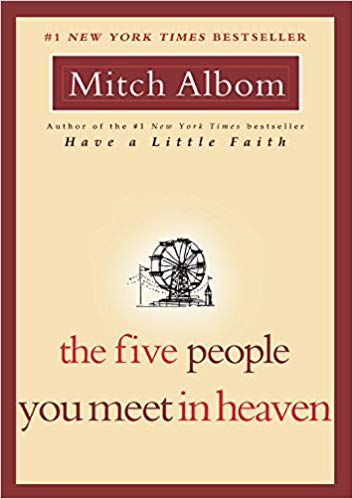 First of all, there is no need to get defensive about my review here. We all know how many times people recommend this book in their TBR list, I was too. If you love this book, all I am saying is that, I didn’t hate it.

This is a story about an 83 year old man named Eddie who has led a dull and meaningless life (according to him) when he dies. Don’t get disappointed people, this happens in like the first few chapters and then Eddie goes to heaven where his journey actually begins.

He meets five people from his life, some he knows, some he doesn’t. But, there have been some significantly life-changing moments when they crossed each other’s paths during their lives on earth. Which is why, they meet him, one by one, to help him understand the meaning of his life.

As interesting as that sounds, if you have read and loved, Tuesdays with Morrie, you will enjoy every bit of this narration. Hell, you might even cry. As for me, I was left a little unsatisfied, never to be whole again. What I expected was more of something, anything. How can you put into words something you don’t understand yourself? Haha. Yes, we are all connected, and yes, things happen for a reason, but I probably wasn’t invested  emotionally enough as much as I should have. This is more of a spiritual read, which some of you might prefer.

What I liked about this book was, it sort of gave me a hope, that when my time comes, I will also meet a few people from my life in heaven. As some of you already know, how I lost my dog a few months ago, my heaven is going to be a beach, where I can throw the ball around which my sweetie Moose can run after. Well, the only regret I have is not taking him to the beach since he loved water so much. But, yes that’s the beauty of this book, that it makes you think about life beyond death which is quite comforting.

Favorite Quotes from the book:

“All endings are also beginnings. We just don’t know it at the time.”

“All parents damage their children. It cannot be helped. Youth, like pristine glass, absorbs the prints of its handlers. Some parents smudge, others crack, a few shatter childhoods completely into jagged little pieces, beyond repair.”

“Parents rarely let go of their children, so children let go of them. They move on. They move away. The moments that used to define them – a mother’s approval, a father’s nod – are covered by moments of their own accomplishments. It is not until much later, as the skin sags and the heart weakens, that children understand; their stories, and all their accomplishments, sit atop the stories of their mothers and fathers, stones upon stones, beneath the waters of their lives.”

(Disclaimer: All opinions expressed are strictly my own and in no way influenced.)

This blog is for people who love to eat, drink and be merry! Well, that's the first priority anyway. If you share the same passion for food, books and travel, then you might enjoy reading what I have to post!

Quote of the day!

There is no shame in fear, what matters is how we face it! – A Clash of Kings (Game Of Thrones II)